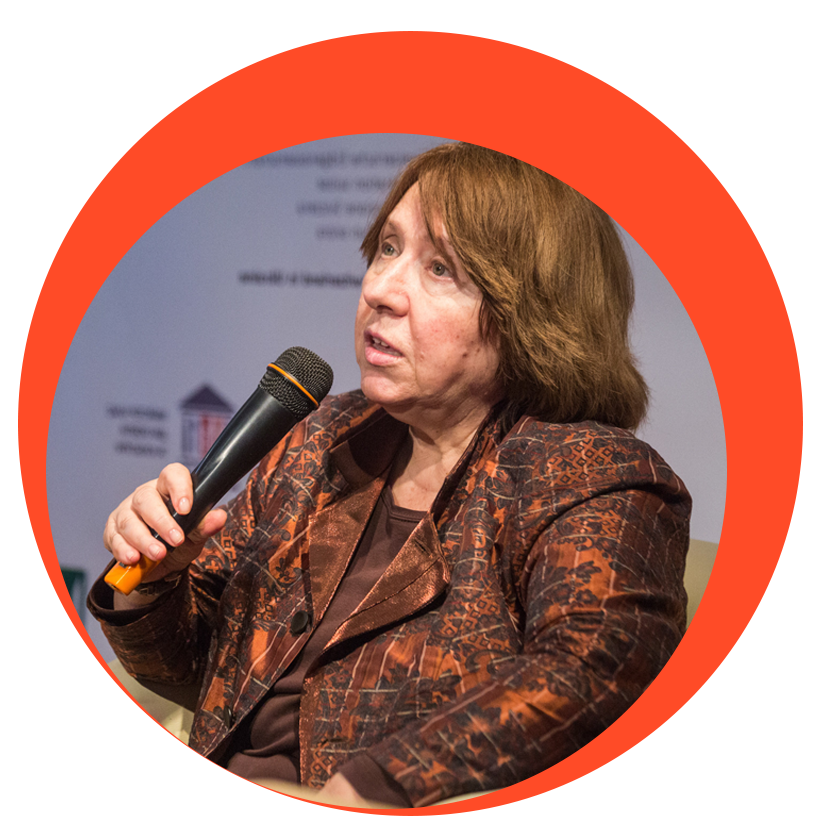 The long-awaited creative meeting of Ukrainian readers with the winner of the Nobel Prize in Literature 2015, Svetlana Alexievich, took place against the backdrop of historical, tragic events for our country: annexation of the Crimea and the war in Donbass...

An important part of the meeting was the Ukrainian presentation of a collection of monologues by witnesses to the Chernobyl accident ― the book "Chernobyl Prayer: A Chronicle of the Future" by Svetlana Alexievich (translated by Oksana Zabuzhko). Talking about the work and catastrophe emphasized the self-identification of the people, humanity through tragedy, man in the fire of history… *The event was organized by the Swiss Embassy in Ukraine in partnership with DOM Master Klass.

It was opened by Ambassador of the Republic of Switzerland to Ukraine, Mr. Guillaume Scheurer.

Being the first translator of the book and the main promoter of the writer's work in Ukraine, Oksana Zabuzhko led the event.

Attempts to rethink what has happened, outline their personal attitude, and get answers for the painful questions posed to humanity by Soviet history ― such a sincere, deep, and partly acute, vivid dialogue of two strong and creative women, Svetlana Alexievich and Oksana Zabuzhko, the representatives of national literatures of Belarus and Ukraine, it was.

The chosen format of presentation of S. Alexievich books (a conversation on the stage) became an opportunity to get acquainted with the writer's artistic method: "the genre of voices", a chronicle, even cinematic principle of working with texts, being a guide to understanding the work of Svetlana Alexievich. Besides, it was a unique opportunity to get acquainted with her: a broadbrow, open, and stunningly sensitive woman, a skinless human being of piercing truth, Strong and Free!

*Svetlana Alexievich is a Belarusian writer, Nobel laureate in Literature (2015). She was born on May 31, 1948 in Ivano-Frankivsk. Three books by Svetlana Alexievich were translated into Ukrainian and published: "Chernobyl Prayer: A Chronicle of the Future" (Komora Publishing House), "The Zinc Boys", and "The War does not Have a Woman's Face".