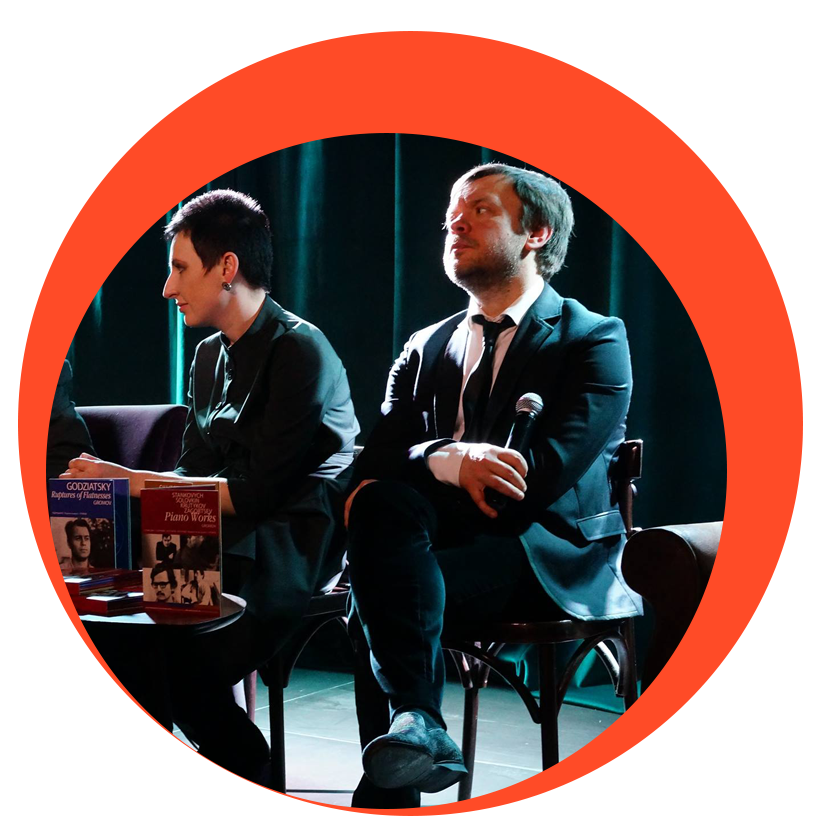 "These works are a masterpiece of Ukrainian art – high, modern art! Not of a provincial approach, but in fact of a global one".
Yevhen Gromov

About the Idea
The anthology "Kyiv Avant-Garde of the 1960s: Borys Liatoshynskyi's School" is the author's project-initiative of pianist Yevhen Gromov, who has worked on its implementation for more than 20 years. He collected, copied, transcribed, performed, and then recorded the works of the Sixtiers from Kyiv. Nowadays, these composers' music is heard at many music festivals in Europe. But, despite the fact that their creativity can be put alongside the world's most famous composers, most of them became known to the general public in Ukraine only recently.

So, by initiating the creation and publication of the anthology, we hoped first and foremost to expand the audience. For the same purpose, it was planned to distribute the publication free of charge to music institutions of Ukraine and foreign institutions – libraries, sound libraries, cultural funds, and others.

The musical anthology "Kyiv Avant-Garde of the 1960s…" is a set of 4 CDs with the recordings of the most important piano works written by the Kyiv composers-students of Professor Borys Liatoshynskyi.

In the wave of creative freedom, young and fearless talents, the Sixtiers, have made a real explosion, a kind of breakthrough. Their pioneering experiments made things hard for them because at that time such music meant only one thing – stylistic and ideological sabotage.

Nevertheless, they became the next generation of Ukrainian artists.Most of the piano works are world recorded premieres. Some of them are little known, and most should be understood…

*Most of the works are world premieres on record.

Borys Liatoshynskyi (1895-1968) is a Ukrainian composer, symphonist, founder of contemporary Ukrainian music, as well as one of the greatest innovators of the 20th century.

Liatoshynskyi brought up more than one generation of Ukrainian composers. First and foremost, his school is an expression of individuality, respect for a different opinion, and freedom of search. That is why his students are so dissimilar to each other in their creative work: Leonid Grabovskyi, Vitalii Godziatskyi, Valentyn Sylvestrov, Yevhen Stankovych, Petro Solovkin, Sviatoslav Krutykov, and Volodymyr Zahortsev.

Yevhen Gromov
Gromov is a Ukrainian pianist, musicologist, and the laureate of L. Revutskyi (1998) and StART (2003) Prizes.
He has held more than 70 world's and Ukrainian premieres. Yevhen was recognized for his contribution to the development of Ukrainian musical culture of the 20th-21st centuries. He has performed solo concerts at both international and Ukrainian music festivals. Moreover, the pianist has performed in Ukraine, Russia, Belarus, Poland, France, Italy, Switzerland, and the Netherlands.