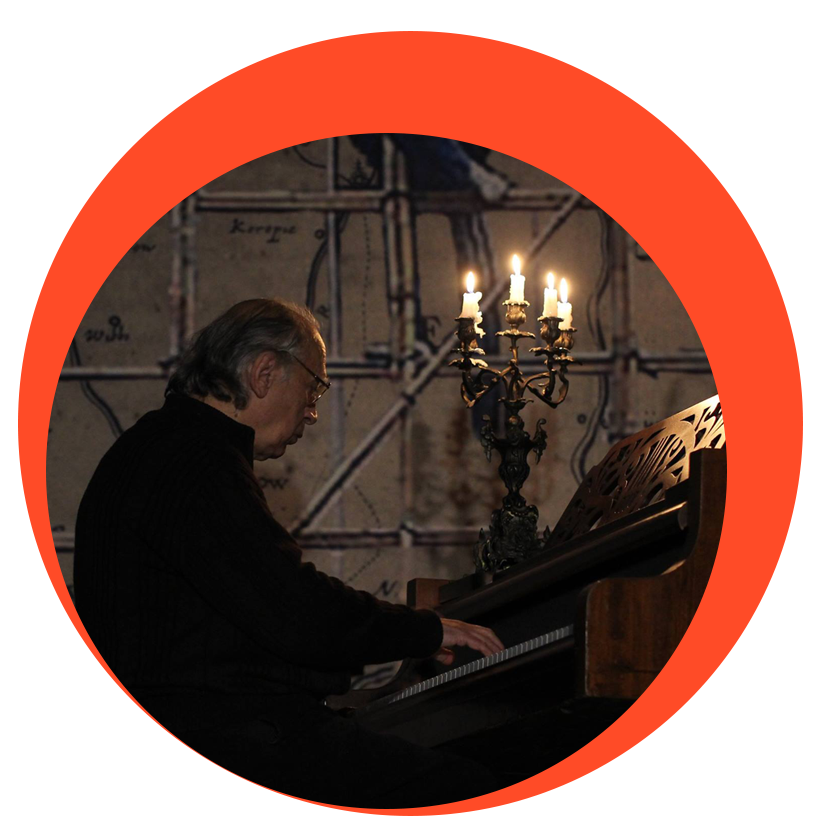 His music communicates with the whole world.
Yevhen Gromov

"At the time when texts appeared (especially classical and ontological ones, which are familiar to everyone), they were alive. They were red aloud. Then people began to read them aloud less and less. Sometime after that, they began to read them silently, with eyes. When this occurs, any verse starts withering. In other words, it still lives but like a butterfly under glass. But this butterfly preserves its beauty even under glass, and music is something that brings it to life for a moment. It is the life-giving water that invigorates it. And it gets free from its glass prison to fly again..."
V. Sylvestrov

About the Idea
DIM MK friendship with Valentyn Sylvestrov began in 2013. The greatness of the Maestro's talent, his desire to combine poetry and music, as well as words and sounds were the creative search by which Valentyn Vasyliovych lived in the last few years. It impressed him and prompted the creation of a large separate festival, not limited to Ukraine.

The festival was presented:
February 2014: DIM MK, Art Forum "I Remember. The Winter that Lasts" dedicated to the Heroes of the Heavenly Hundred. Premiere of the project "The Music of Poetry".
March 2015: France (Paris, Strasbourg).
September 2015: Chernivtsi, the 6th International Poetry Festival MERIDIAN CZERNOWITZ.
October 2015: the United States of America (New York).
August 2018: Kyiv, the concert–opening ceremony of Bouquet Kyiv Stage 2018.
*Almost all of the Maestro's compositions were world premieres.

About Personalia
Valentyn Sylvestrov is a world-famous Ukrainian composer, winner of the Gaudeamus International Composers Competition, Grammy nominee, and People's Artist of Ukraine. He was awarded the Order of Merit (the 3rd Grade) and the Order of Prince Yaroslav the Wise (the 5th Grade).

Being a recognized master of classical music and the most prominent Ukrainian figure on the world stage, Sylvestrov is the most performed Ukrainian composer in the West.

He is a composer who has been serving music for over 30 years, but he is far more than a composer.

Valentyn Sylvestrov's "Music of Moments" featured "Mozart Moments", "Instant Waltzes", as well as songs by Shevchenko, Lermontov, John Kitts, and Mandelstam. It brought together the best Ukrainian musicians and various instrumental bands at the festival. Special attention was paid to the songs on Taras Shevchenko's verses. According to the composer's definition, Kobzar's words gave birth to a special Ukrainian melodism.

There have been held two world premieres: "Four Songs on Taras Shevchenko's Verses" and the series of cycles "Maidan 2014" (choral works written during the Revolution of Dignity).

"Music connoisseurs say this is a phenomenon, and I am very glad that now the world will be able to professionally evaluate whether it is a purely Ukrainian or a world-wide one..."
Leonid Finberg