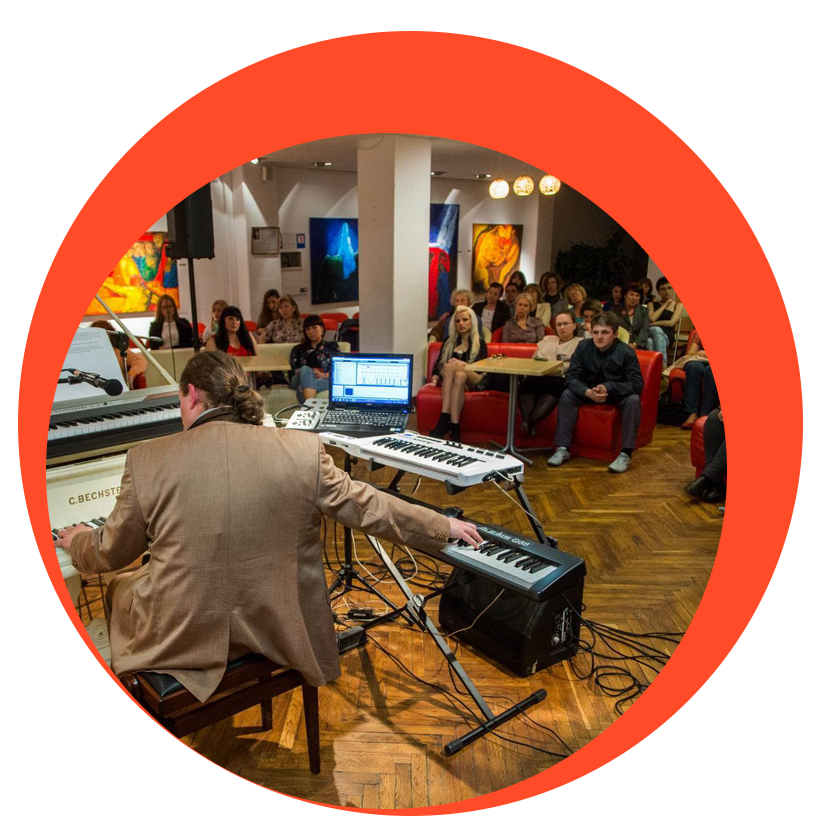 Behind the Idea
The idea of a new vision of culture as a driving force for social change in many ways made the cultural centre DIM Master Klass hold festivals and marathons dedicated to the important historical dates and figures. The initiative of a large circle of progressive creative people (artists, musicians, writers, lecturers, and conscious citizens, many of the best representatives of the public and political community of Ukraine) was taken by us and Art Forum became a separate multy disciplinary artistic and discussion platform, the new type of festival.

Behind the Objective
Our objective was to unite conscious people around a common vision of the future of Ukraine. An important component of Art Forums was also raising funds for the important needs of society.

Behind History
Each time Art Forum focused on specific issues that became the basis for artistic embodiments of Ukrainian cultural personas.

2014: the first Art Forum of the Kyiv "Hromada" had to respond to the challenges named by the Revolution of Dignity in Ukraine. The main purpose of this project was the consolidation of society, discussion of the conscious people of Kyiv the common vision of the native city's future, and creation of the community that can self-organize, influence the situation and dramatically change it.

2015: "I Remember. The Winter that Lasts" - reminder of the Anniversary of the Revolution of Dignity , dedicated to the commemoration of the tragic Maidan events.

2016: "The House We Live in" - actualization of the definition of Home, personal space, and state sovereignty, as well as the concept of Home for each individual. City, country, planet, and the Universe as our mutual Home.

Format
Art Forum is the combination of exhibition, concert, theatre, literature, and cinema programmes with the educational events and a broad discussion of cultural and public issues.
Charity was an important component of Art Forums. The money raised during Art Forums made possible to:
• Purchase surgical equipment for Kyiv City Clinical Hospital No. 18;
• Evacuate 115 people from the ATO area with the help of volunteers;
• Assist the needs of war victims in Eastern Ukraine.